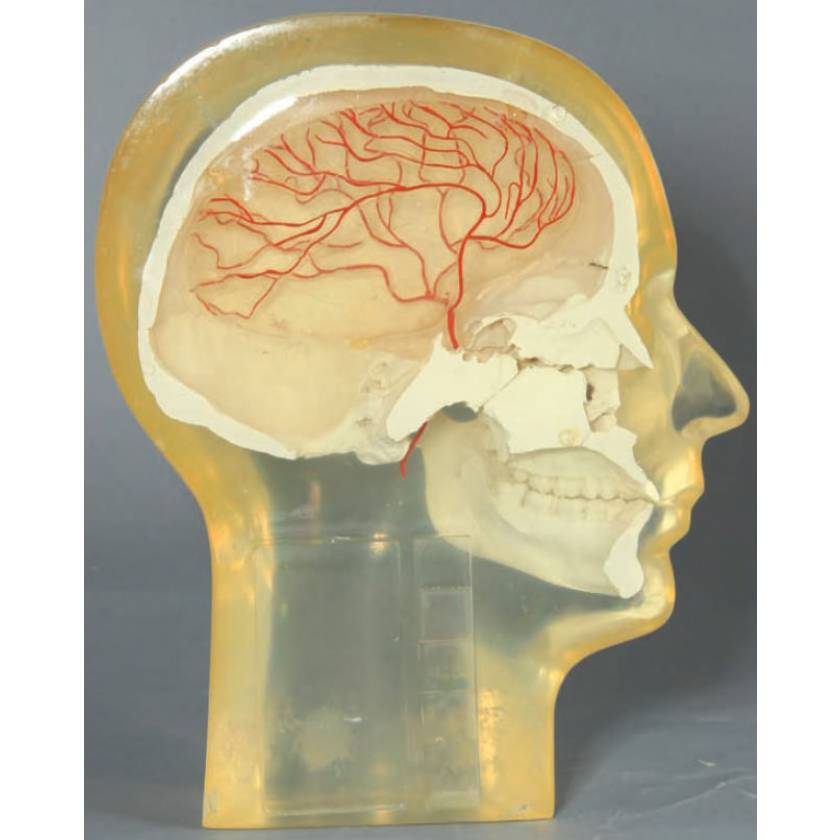 Move your mouse over image or click to enlarge
Is this item the best fit for your needs?
Let our experts help.
800-423-2767

Each phantom contains a 5-step wedge. A 2-10 line pair/mm test pattern is optional. Other patterns or test objects and custom pathologies are available on special order.

Provides a "dry run" to completely check out angiographic equipment and ensure that is operating satisfactorily in all significant details before subjecting patients to radiological procedures. If the imaging system malfunctions, the phantom also plays a critically important role in isolating and verifying correction of the problems. It confines the variables to components and technique and is an invaluable service and teaching tool.

Unique RSD soft-tissue equivalent material is used for the skin tissue and neck and is adjusted to brain density in the cranium. This material closely duplicates brain tissues in radio-absorptive and scatter properties. The phantom is virtually shatterproof.

A high contrast 3-dimensional vascular pattern is placed in the median plane. The pattern closely resembles an internal carotid arteriogram in its early phase. The radio-density of the angiographic pattern has been adjusted to represent a 75% contrast-media. The phantom can be used omnidirectionally.

Available as either a full or half head. The full head has the advantage of representing the full scatter properties and subject contrast of a human head. The half-head model is well suited to non-grid techniques. It has the advantages of lighter weight, lower cost and smaller size, easily fitting into a briefcase.

The combination of the simulated vascular pattern, resolution chart, and stepwedge enables the user to correlate physical parameters (such as resolution, contrast and speed) with the subjective evaluation of the skull markings and the vascular detail.

After developing the first anthropomorphic test dummy for the aviation industry in the late 1940's, the RSD team directed its impactful R & D to revolutionize healthcare diagnostic imaging with anthropomorphic phantoms. RSD diagnostic imaging phantoms are routinely used to perform quality control on imaging equipment and to train healthcare professionals in best practices. The company has become the leading supplier of QC and educational solutions for medical diagnostics and radiation therapy, featuring products such as anthropomorphic phantoms and dosimetry verification phantoms.

This item is not able to be returned.

Write a Review
Write Your Own Review
Only registered users can write reviews. Please Sign in or create an account

Customer Questions
This product has no questions.
Did you find what you were looking for?
You May Also Like