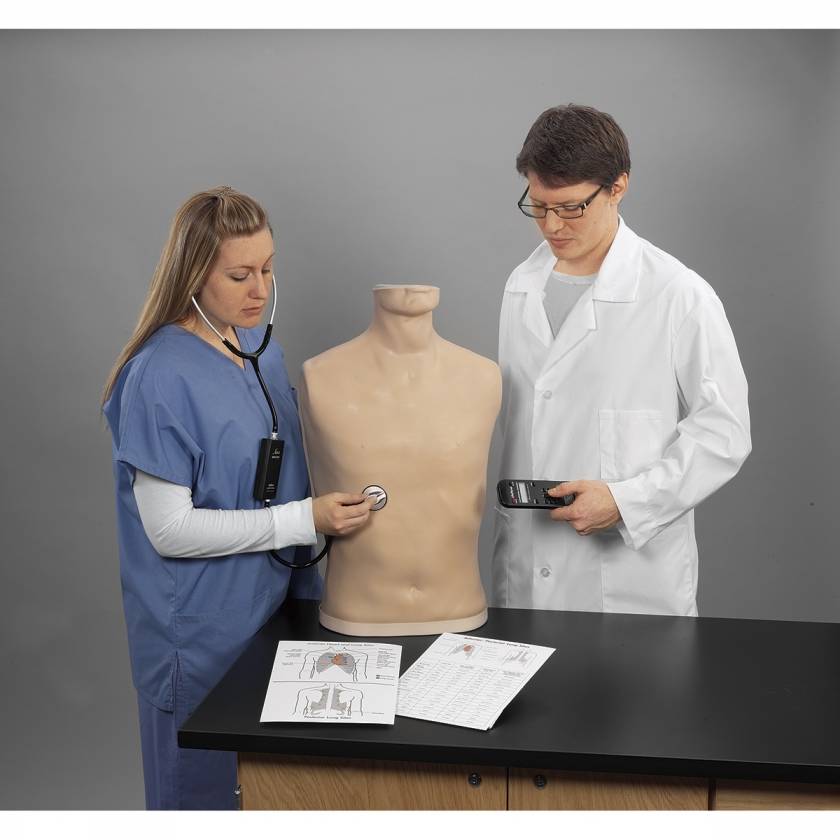 Move your mouse over image or click to enlarge
Is this item the best fit for your needs?
Let our experts help.
800-423-2767

A major breakthrough in auscultation training!

The instructor selects from a menu of heart and lung conditions by wireless remote control. The manikin presents itself as a real patient without visible auscultation sites. The student must palpate to identify correct auscultation locations, and will hear different heart and lung sounds as the Smartscope™ is moved to different locations on the manikin. A diagnosis of the condition selected by the instructor can be made by comparing the variations in sounds occurring at different sites. Just like a real patient!

Lung sounds can be detected at five anterior, 10 posterior, and two midaxillary locations. Students can practice auscultation at six anterior heart sites. The remote control does not have to be pointed directly at the manikin or SmartScope™ to operate. One remote control will operate all SpartScopes™ within a 100 ft. range. Great for group instruction. Listen to the sounds by either using headpieces on SmartScope™ or by connecting to an amplifier/speaker (not included). Range on the unit is up to 100 ft. of remote access. Includes manikin, one remote control with LCD display, one SmartScope™ with single- and dual-user headpieces, and hard carry case. Operates using two AA and two AAA batteries (included). Five-year warranty.

Authorization must be obtained from Customer Service within 30 days of product shipment. Product must be returned in new, unused condition. All returns are subject to a restocking charge. All shipping charges remain payable by the purchaser.

Write a Review
Write Your Own Review
Only registered users can write reviews. Please Sign in or create an account

Customer Questions
This product has no questions.
Did you find what you were looking for?
You May Also Like